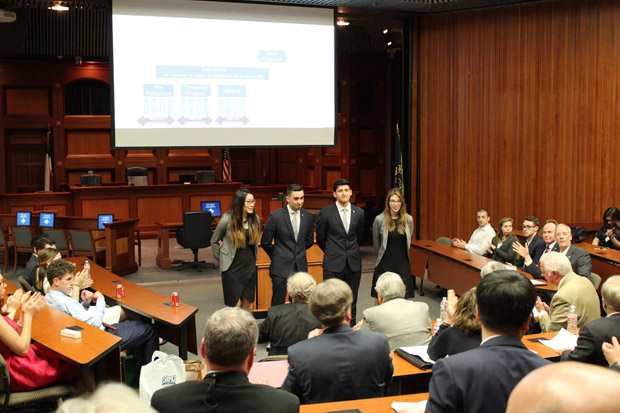 Bronze medals went to the other two semi-finalists, the Rotterdam University of Applied Sciences and Avans University of Applied Sciences.  The prize for most inspiring coach went to Rotterdam’s Gerard van der Star, while Sarah Strange of the Dublin Institute of Technology won the prize for best individual presenter.  Denmark’s International Business Academy was named most spirited team.

The weeklong tournament featured teams from 16 different NIBS member universities, representing 10 countries and four continents.  The 16 championship round teams were the top finishers in a qualification stage held in the fall.

“The level of competition at this year’s event was the highest I’ve seen,” said Robin Ritchie, Carleton coach and a professor of marketing at the school. “It was also the one of the most international fields ever, with a terrific balance of teams from North America, Europe, Latin America and Asia.”

The NIBS Case Competition consists of a round-robin tournament, followed by a series of knock-out matches.  Teams are given either three or four hours to read the case, come up with a plan, and prepare a presentation for a judging panel of academics and industry professionals.

To add to the challenge, competitors are not permitted internet access while preparing their solution. Students must draw on their own business knowledge and each teammate is allowed to bring one textbook.

The 2017 edition of the event will be hosted by the Satakunta University of Applied Sciences in Rauma, Finland.  Registration for the qualifying round will open on September 1.