The Network of International Business Schools has a new president.

Prof. Hans van Oudheusden, Head of International Relations at the Rotterdam Business School’s School of Financial Management, formally assumed the NIBS leadership role on 26 September.  He replaces Prof. Ian Charles, who has served in the position since 2012. 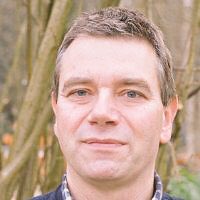 “This is truly an honour,” said Prof. van Oudheusden. “NIBS has contributed so much to internationalisation at Rotterdam, and to my own personal network. I look forward to continuing the effort to create world-class initiatives that enhance international business education and facilitate connections among our members.”

The choice of Prof. van Oudheusden as president was approved by members at the NIBS Annual General Meeting in Breda, Netherlands in May.  It became official during the recent NIBS Board meeting in Leuven, Belgium.

Prof. van Oudheusden has served on the NIBS Board since 2012, and was previously vice-president responsible for student competitions.  He brings a wealth of experience designing international curricula and managing student exchange programs at the Rotterdam Business School.  He was also responsible for the introduction of several new initiatives within NIBS, including the widely praised Worldwide Business Plan Competition.

Prof. Charles, who also serves as Associate Dean of International Partnerships and Collaborations at the International Business Academy in Kolding, Denmark, led NIBS through a period of substantial growth since taking over from David Gillingham, the organisation’s founder and original president.

Reflecting on the last four years, Prof. Charles observed: “I’m deeply proud of what we’ve achieved, particularly in terms of benefits to members. The NIBS accreditation program has matured, our student competitions have grown in both size and stature, and we’ve made tremendous strides in facilitating the sharing of best practices through our conference and awards.”

“The growth we’ve seen in the NIBS family is a consequence of that work,” he added. “Thanks to these efforts, we now have more active members, from more parts of the world, than ever before.”